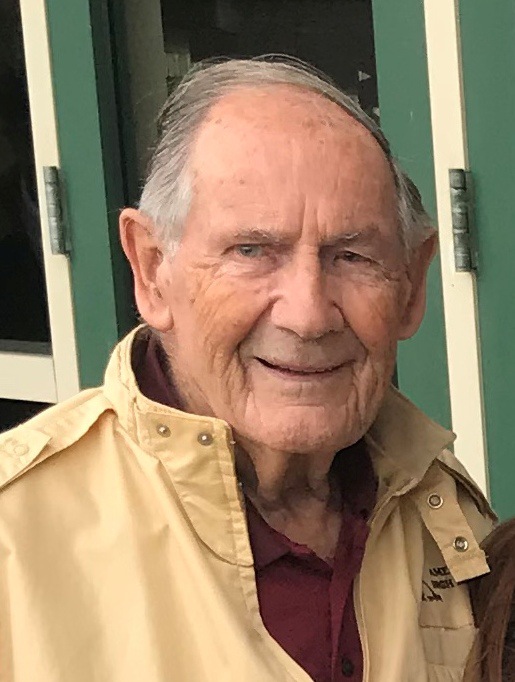 Norman Tutin, age 93, passed away on Tuesday, March 31st, 2020 at his home in Bay Village, surrounded by his family. Norman is proceeded in death by his beloved wife, Margaret A. Tutin (nee, Ainslie), of 65 years. Loving father of Barry Tutin, Diane Tutin-Westover, Brian Tutin and Sandra Tutin. Devoted Grandfather of Lyndsey (Felix) Hafner, Ian (Abigail) Westover, Madison (Curtis) Mange, Jennifer Tutin-Smith and Tiffany (Carly) Tutin; Fond Great-Grandfather of Julian, Harrison, Liam, Ethan, Issac, Eli, Ezra, Lucy, Baylor, Ramsey and Carson. Born January 27th, 1927 in Boldon Colliery, England, son of John and Esther (nee, Gatenby) Tutin (deceased). In his early years, Norman proudly served as a Petty Officer in the Royal Navy. In 1953, Norman moved to the United States to pursue a new life with his family. Norm will be remembered for his hard work and dedication, having successful careers as both an entrepreneur, and salesman. Norman was an avid golfer and had a love for travel. He considered Florida to be his second home, especially during the colder months, a place where he made lifelong memories with both family and friends. A memorial service will be held Saturday, July 18 at 2:30 pm at Jenkins Funeral Chapel, 2914 Dover Center Road, Westlake, where family and friends will be received from 1pm until time of services.

I am honored to have known Mr. Tutin. Such a genuine Englishman he was. And blessings to you!

To Barry and all the family. I was saddened to read today, of the death of my cousin Norman. I have happy memories of his visits back to the UK with Peggy, and I will never forget the warm welcome they gave us when I visited them in Ohio with my parents in 1970. My thoughts are with you all. Please email me when you have a moment. God bless.

I’m so sorry that your dad has passed. I remember so many fond memories growing up with your family in Bay Village. In fact I believe your folks were godparents to Lori and I. It is hard to believe they are all gone now but the memories are wonderful.

Barry you have always been such a kind and respectful person. I always look forward to you coming in to chat and to hear all of your fascinating stories. My heart goes out to you in your loss. I’m am so sorry for you and your family. My thoughts and prayers are with you all. If there is anything I can do, please don’t hesitate to reach out. I am always here if you want to talk or hang out. Cristy

What a great man who left a great legacy! Barry I love ya brother and know your dad will live on through you and your family forever. God Bless you all.

I’m so very sorry for your loss, with sympathy, Amy

Sorry to hear about your Dad.
May he rest in peace.

Norman was a delightful man that we were fortunate to get to know at Grand Shores West. RIP

My sympathy goes out to you. May you keep your memories of your dad close to your hearts.

My sympathy goes out to you. May you keep your memories of your dad close to your hearts.

So very sorry to hear that your Dad has passed away.
He will be greatly missed and fondly remembered. Our thoughts are with you all at this very sad time.

Brian and Family :
Please accept our most sincere sympathy on the passing of your dear Dad - he was a true gentleman and your family was indeed blessed with two wonderful parents who are at peace together again. Please take good care in midst of all this crisis and stay safe and healthy .

Norman will be sorely missed and will be always in our thoughts.

I admired Norman very much. He was one of the best men I've ever known.
Please accept my sincere condolences on his passing.

So sorry for you loss. He was a great man.

So very sorry to the entire family for your loss . Norm was such an inspiration to me in so many ways in how he lived his life all the way to then end . He was kind , thoughtful and a real conversationalist . I truly will miss him . May he Rest In Peace for eternity.
Love to you all .

It was such a joy and privilege to have Norm a part of our lives for years.

R.I.P. Norm, I learned so much working with you. Your knowledge of the business was so huge and you had such a great sense of humor. Good Times and a Good Man. My Prayers and Thoughts to the Tutin Family.

My condolences to Norman's family. Norman was my neighbor across the hall at Grand Shores. Didn't see him much but when I did always said hello in his quiet way. He will be missed.
Farewell Norman

Norm will be missed by so many people, and we are among them!
Loved sitting beachfront at GSW and talking to him. His dry sense of humor made me laugh.
GSW will never be the same without the Big Kahuna being there.
I know he is dancing with Peg right now.
Our hearts and hugs go out to the Tutin family.

Our deepest condolences to family and friends. We are glad we got to know Norm, he will never be forgotten.