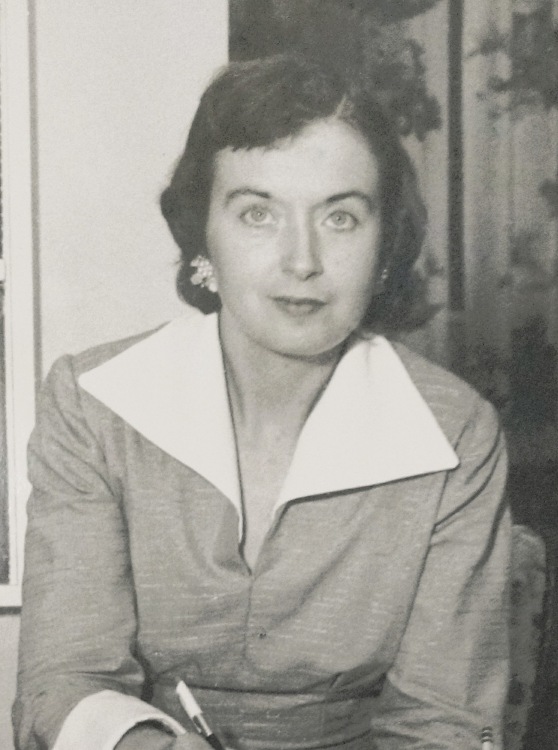 On November 15th, 1955, Rosalie and Robert Oldrieve welcomed Robin Elizabeth into the world and thus was born the “3Rs” family – as in, what teachers of that era would describe as Reading, Writing, and Arithmetic.

Within four years Randall David and Richard Matthew were born, and the 3Rs became the 5Rs. On Randall’s birthday of May 7th, 2020 – some 19 years after our father's death – our mother has joined him – and our Earthly family is back to only 3Rs.

Survivors include her sister Amelia Bradley and Amelia’s husband Orrin. They and their three daughters Heather, Holly, and Laurel have been teachers. Similarly, Robin and Rich (of the 5Rs family) became teachers, while Randy became an artist who has created many fine sculptures, murals and drawings. I particularly remember the artwork of the 3Rs on Easter Sunday in about 1964 and his nativity manger that won the Columbus Museum of Art’s show. While travelers on I-71 between I-480 and Bagley Road can clearly see Randy’s large murals on the inside and outside of the Fathead’s Brewery in Middleburg

Rosalie was born on All Saints Day, November 1st, 1928, in Worcester, Massachusetts, and went to elementary school in Hartford, Connecticut. Her father was a risk assessor for an insurance company – his specialty was helping industrial factories reduce their risk of accidents such as boiler explosions. Two things she taught her kids from her dad's experiences of driving throughout New England that help reduce risk while driving were: 1) Never drive over a paper bag or cardboard box, even if it looks as innocent as a McDonald's bag, because there could be a metal object in it that causes a tire blowout. 2) When driving on snow on a two-lane country road, always drive in the new snow.

Eventually, her dad's expertise led him to take a job with Armco Steele in Middletown, Ohio, where he wrote their safety manual. The immediate effect was that Rosalie babysat for Ohio State basketball legend Jerry Lucas. Thisinitially led to a conflict of loyalties when the University of Cincinnati defeated Jerry Lucas’ Ohio State in both the 1961 and 1962 national NCAA championship games. Then loyalties merged in 1963, when Jerry Lucas played for the NBA’s Cincinnati Royals and teamed with U.C.’s Oscar Robinson.

At Cincinnati, Rosalie joined the American Association of University Women, and became president of the "Independent Association," a kind of coed sorority and fraternity. She then went onto earn a BA in fashion design in 1950 and a BE in education in 1951. Even though teaching was her career choice, Rosalie designed and sewed her own wedding dress,as well as the dress in the AAUW picture. To that end, she made sure even her sons knew how to sew their own patches on their Boy Scout uniforms and backpacks. Some 60-plus years later, when we would go to art lessons at the Center for Artful Living sponsored by the Carolyn L. Farrell Foundation for Brain Health, she was pleased to have me (her son Rich) help her create designs – in particular, an angel in a fancy gown.

Ironically, two years ago, the honor student that I was tutoring – or tutee – from Kentucky, was asked by his English teacher to read J.D. Vance's book the "Hillbilly Elegy: A Memoir of a Family and Culture in Crisis.” While listening to the audible version to help my tutee with his papers, I realized Vance could have been talking about the two sides of my parents' families – the workers who had migrated north from Kentucky to work in the factory, and the college-educated engineers from the east.

The union came about when Dad, the only child of Edwin and Evelyn Oldrieve from northern Kentucky, escaped from a cycle of poverty – much like Vance – by enrolling in the University of Cincinnati’s engineering co-op program. This led to him being hired by the National Advisory Committee on Aviation (NACA) which became the National Aeronautics and Space Administration (NASA). While attending events sponsored by the “Independent Association” mentioned earlier, Robert and Rosalie met and eventually got married.

Nonetheless, demonstrating her independent streak, during the summer of 1953 Rosalie took a European tour and was in London during the week Queen Elizabeth II was coronated. Then the following summer, she took three summer school courses at the University of Colorado, Boulder. This fact she only revealed 20 to 30 years after I had picked Cornell University over Colorado.

After getting married, the young couple ended up in Oak Ridge, Tennessee, where Dad was sent by the NACA to learn how to design a nuclear hot lab to study how metals react to cosmic radiation in space and possibly finding light alloys for nuclear powered planes and rocket ships. His experiences with a nuclear accident led him to later write a fictionalized account in "Hot Lab"--his book that Rosalie typed and edited. From Oak Ridge the family moved to Perkins, Ohio where Robert designed the hot lab at NASA's Plum Brook facility and Rosalie taught Spanish and Language Arts at both the Berlin Heights and Perkins High School.

There she was the founding president of the Sandusky Chapter of the American Association of University Women. Fifty years later she was invited to be the keynote speaker at the chapter's anniversary dinner. By this timeMom's memory was slowly fading, and Robin and I wondered whether we should accept the invite and take her. Mom proceeded to hit a home run by describing her experience meeting the AAUW's founders who were 50 years her elder, as well as the goals of the organization to help inspire girls and force universities to hire women professors with PhDs into tenure track positions.

She also did civil rights in both direct and subtle ways. For instance, as members of Christ Episcopal Church in Huron, Ohio, Robert and Rosalie travelled on a church bus to Martin Luther King's March on Washington in August 1963. The following year the African American sisters Jane and Karen Palmer accompanied our family to the 1964 New York World's Fair to expand their horizons. Rosalie also volunteered to teach in Sandusky's experimental summer Head Start style program. She would always claim that she brought us kids along to serve as models. On one these retellings, Robin, nudged me and said, "You realize that Randy and I were the models; you were there to learn the skills she was teaching." Ultimately, Robin, my stepdaughter Libby White, and I all ended up teaching language, speech, phonemic awareness, phonetics, and reading to early childhood at-risk special needs children.

Sometime in the mid-60s, someone at NASA finally asked the question: "What happens if one of those nuclear-powered planes crashes?" (Something Putin forgot to ask his scientists). Shortly thereafter, Dad saw the handwriting on the wall, and asked for a transfer to what is now NASA's Lewis Glenn facility and became an expert at high temperature ceramic/metal alloys as well as failure analysis.

Subsequently, Mom was hired as a Language Arts and Spanish Language teacher at Westlake High School. A few years later,Rosalie was elected the president of the Westlake Teachers Association and helped negotiate at least one contract.

Nonetheless, it was teaching that matter most to her, and matter what a given student’s ability level, Mom saw the best in almost every student and showed them respect in her teaching. While we were in high school Mom took her classes and my siblings to Mexico and Spain (My high school “rebellion” was taking French and her proposed third trip to France, England, and Spain never was scheduled). She also took all three of us and her students to local community theaters, Karamu House, and the Great Lakes Shakespeare/Theater Festival.

One summer she taught a world literature class in our Bay Village house. Somehow, she forgot that I was playing left fielder, albeit poorly, at the Little League field on the corner of Wolf and Clague roads. Consequently, I walked the three miles home, and when I walked in the door with bat and glove in hand, I could hear chuckles from her students.

Around the time sister got married and started her own family,Dad took early retirement at NASA. Consequently,Mom and Dad bought the lake front house Dad always wanted in Vermilion. In order to avoid a wintry commute,Mom rented an apartment in Westlake. Then, for my first two years of teaching I stayed with her and learned some tricks of the trade from a master.

Dad's early retirement meant that Robin's children Carrie, James, and Felicia not only got spoiled rotten, they got to tour the country in a mobile home while visiting campgrounds, tourist traps, breakfast diners and, of course, Disney World.

After Mom retired from Westlake High she served over a decade as a jack of all trades substitute teacher at Vermilion High School. She had fun teaching real-life history, bringing space rocks, as well as Dad as a guest speaker, to science classes.

When I was running in high school and then at Cornell, Mom became famous for handing out lollipops at races. In 1988, Mom and Dad drove all the way to the Boston Marathon while I flew. The first time I saw them was at the 13-mile mark where Dad ran out from the crowd to hand me a water bottle. They then met me at the hotel where they took me to dinner and the airport. Apparently, Mom also took a towel and ashtray from the hotel.

When I ran for Congress Dad kept trying to break campaign finance laws while Mom somehow walked up to a house on a prominent five-way intersection and convinced the owners to put up a campaign sign that caused even my opponents to ask, "How?"

When she was in her 80s, I once visited Mom at the Lake Erie beach house only to find her weeding the wildflower garden that I had planted by throwing seeds over the side of the cliff.

A few years later, in June 2014,on the condition that Susan and I put up a fence and keep the little kids from running off the edge of the cliff, Mom’s granddaughter Libby married Chris White at the Vermilion house.

As Rosalie transitioned from independent living to needing aides to help her with her medicine, laundry and housekeeping, and then transitioned again to full memory care, she became famous and often loved for her feistiness, for always proclaiming, "I'm an Independent Woman," and for teaching aides how to speak Spanish.

In Lieu of flowers, memorial contributions can be made to Carolyn. L. Farrell Foundation’s Center for Artful Living. https://farrellfoundation.org/donate/

Love you Mom. And you need not worry that you will always be remembered.

Our sincere sympathy goes out to you in the loss of your
mother. We did not meet her but the results of her skill in raising her two fine sons says a lot about her.

We are deeply sorry for your loss. I hadn't seen Rosalie for a few years, but have memories of what a gracious woman she was. We did exchange Christmas cards for many years and I recall one year receiving a gift of cookies and candy through the mail--what an unexpected treat. We know that you will miss her as you do your dad, but have so many memories to recall. Jenny & Dave Morris

How I wish I had known her in her and my younger years! She had quite a remarkable life. My deepest condolences go to all those who loved and appreciated her: friends and family, especially Susan and Rich, Robin, Randy and Felicia.

Welcome to all those who have come to this Guestbook to read about Rosalie's life and to share your own stories about Rosalie.