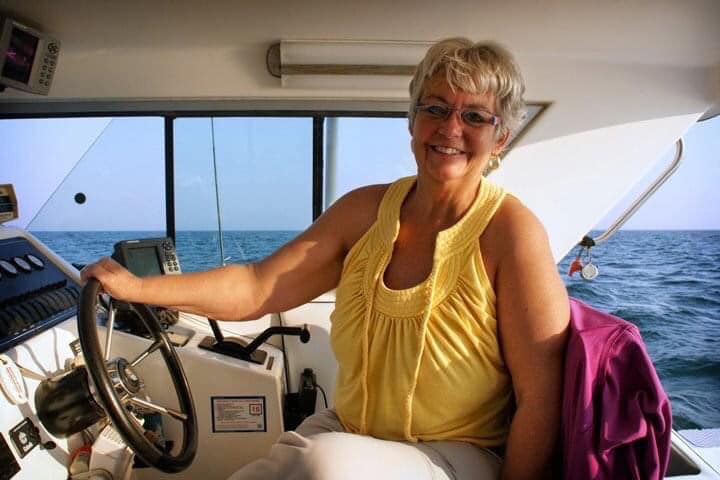 Pamela Ann Viers, a music teacher and band director, passed away unexpectedly on May 29, 2020 at the age of 65.

Pamela is survived by her beloved husband of 43 years, Dennis Alan Viers; loving and devoted mother of, Melissa (Susan) and Robert (Megan); loving and spoiling grandma of, Sofia, Liam, Elliot, and Gavin; and her brother, Gary Bassett. She is predeceased by her father, Howard Bassett; her mother, Georgia (Bassett) Kennedy; her stepfather, Walter “Bud” Kennedy.

Pam was born in Cleveland, Ohio on January 29, 1955 to Howard Bassett and Georgia (Bassett) Kennedy. She graduated from The Miami University (Ohio) in 1977 with a bachelor’s degree in Music Education and worked as a general music teacher and band director for North Ridgeville City Schools for 31 years. On May 21, 1977, she married Denny, a fellow music teacher and band director and her college sweetheart. On March 5, 1980 and August 17, 1982 respectively, she welcomed her two children, who were the most important part of her life.

Pam was a devoted wife, mother, grandmother and an avid musician. She enjoyed boating and fishing on Lake Erie. Pam had a passion for her students while instilling a love of music and impacted countless young adults. She played in the Rocky River and Bay Village Community Bands. She also played in the Naples Concert Band, Gulf Coast Big Band, Naples Big Band, and The Brassy Five Quintet as a skilled and intuitive trumpet player. She enjoyed her many travels to Jamaica and eastern Canada while wintering in Naples, Florida post retirement. She was a woman of faith and enjoyed her time contributing to the choir and bell choir. She will be deeply missed by her friends, family, students, and all who knew her.

A celebration of life is to be scheduled towards the end of summer, conditions permitting. More communication will follow when available.

I was shocked and saddened to learn about Pam's passing. I loved working with Pam, and her enthusiasm and passion for doing the right thing for students was contagious. She was an outstanding music educator, and I deeply appreciate and treasure the support she gave me over the years. She touched the hearts and lives of so many students and families. My thoughts and prayers are with all of you.

Alas, I never had the privilege of meeting Pam, but I heard many wonderful things about her. Denny, all of your bandmates are so sorry for your loss.

So sorry for your loss Denny! Pam was such a wonderful and caring person and will truly be missed. Please know that you and your family are in our thoughts and prayers. Rest in peace my friend.

I am so sorry for the loss of a wonderful woman, teacher and musician. Pam was one of my favorite teachers and she made a huge impact on my son’s love of band.

So sorry for your loss. I am glad that we were able to reconnect our friendships from college with you and Pam and that our wives were able to become friends too.

I'm so sorry to hear of your loss, Viers family. May your wonderful memories help you as you continue through your grief.

Dear Denny, Melissa, Robert & Family,
SHOCKED! We are so saddened to hear about Pam. We have many fun filled memories of her with all 4 of our kids being in band.
Please know she will always be in our memories & hearts.
Thoughts & Prayers are with all of you.

Dear Denny, we will all miss Pams smile and pleasant manner. I am so sorry that she was taken from you way too soon. Take care of yourself and hope to see you again in Naples. Life can be so unfair. Thoughts sent to console your entire family

Denny and Family, My thoughts and prayers are with you all. Pam's loss is so difficult to accept. She was a good friend who was always willing to brighten up your day with her smile. Spending time with Mom, Pam and Gary most evenings will always be a vivid memory that I will cherish for ever. God bless you and may Pam's memory be with us all for always.

Deny, our thoughts and prayers are with you. May God hold you and your family in the palm of His hand and give you peace.

So sorry to hear of of Pam's passing. She was a wonderful musician and beautiful person. We will miss her.

Dennis,
I am so sorry for your loss; Pam was an amazing individual

Denny, so sorry for your loss.
Sincerely, Pat Murphy

Saddened by your loss. My sincere sympathy to the family.

We are deeply saddened to hear of the loss of Pam. Pam was always so nice. Life is too short. Our thoughts are with Denny and family.

My heartfelt condolences to Denny and all the family.
You are in my prayers.

Pam will be truly missed by all who knew her: she was such a vibrant and kind person. Our deepest condolences to all her family and friends,
Jackie and John Burrows

With deepest sympathy for your loss. We will keep you in our thoughts.

Dear Denny and family, I was so very sorry to hear of Pam's passing. Our thoughts and prayers are will you all at this very sad time.

Prayers to the family. Look forward to hear her playing with Gabriel.

It is with great sadness that my wife and I heard of our former fellow Westlake High Band member and fellow Lake Erie fisherperson has passed. Our thoughts and prayers are with you and your family Denny.

Hope you are all coping as best you can!!

Memories! I remember the wedding....I remember when Pam and Denny stopped in SC to see us.....I remember attending a college football game at Miami of Ohio, I even remember a special chicken dish that Pam prepared!!! I cherish the memories! Love to the family as you adjust to “life without Pam/mom/grandma”.

I can see the legacy she left behind for her grandkids, Sofia and Liam, with their love and gift of music. Hugs and prayers for all of you Viers.

Denny and family we are very sorry for your loss. We will surely miss Pam.

Love leaves a memory not even death can steal. May all your wonderful memories with Pam live in your heart forever Denny. My thoughts, prayers and God's Blessings are with you and your family always.

We share your loss, and may God bless and give you
peace at this time.

Denny,
So sorry for your loss. Please know we have you and your in our thoughts and prayers.
Lou

It was such a pleasure knowing Pam as a member of the trumpet section in the Naples Concert Band.
Our thoughts and prayers are with you Denny; Pam was a great musician and a dedicated teacher.

Denny and Family my thoughts and prayers are with through this truly difficult time. May all your loving memories sustain you.

Denny, please know that we hold you and your family in our hearts and we pray for God’s peace that transcends human understanding to wash over each of you during this time and into the future.

Pam was such a positive caring person. We will miss hearing her play in church. She will be missed in all the groups she played in. We are all better people for knowing her

I am so very sorry for your loss. May God be with you during this time and always.

We are so sorry for you loss. We are thinking of all of you.

Sincere condolences to everyone in the Viers family. We are sorry for your loss, pain, and suffering. God bless.

Mom the overwhelming amount of love we have received for you is amazing. You impacted the lives of so many for the better. Mom we love you and miss you already!

It has been my honor to have experienced playing with the two of you in Florida. It has made us feel welcome, and made our retirement something to be really enjoyed. Pam, you will be missed. Denny, you can always count on us as friends. You are n our thoughts and prayers.

Denny and Family, You all have my deepest sympathy in your loss of Pam. She was truly a dedicated musician and friend. Tom Curcio

Going to miss you a ton Mom

Beautiful lady with a wonderful smile for everyone. Naples won’t be the same. Taken from us all way too soon.

We offer you our thoughts, prayers and well-wishes during this dark time in your life.

We will miss our friend.

My condolences to Denny and the rest of the family. I always enjoyed talking to Pam. May she Rest In Peace.

Pam was a wonderful person and very passionate about her family and music. I feel honored to have known her as a fellow musician and friend the past few years.