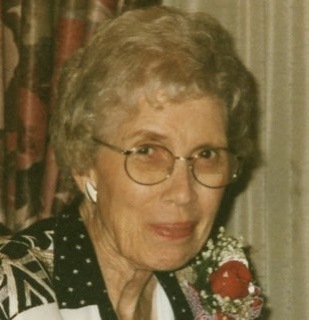 Miriam Bernice Routa, 98, passed away peacefully on Friday, September 25, at Westlake Village Skilled Nursing.  She was born September 20, 1922, to Arthur and Flora (nee Putnam) Jones.  Miriam lived in Rocky River when young and then her family moved to Lakewood.  She graduated in 1940 from Lakewood High School and then attended Dyke Business School.

Miriam’s favorite secretarial job was working for the chairman of the C&O Railroad, Cyrus Eaton. The office was on the 36th floor of the Terminal Tower in downtown Cleveland.  One of her fondest memories was traveling in Mr. Eaton’s entourage to New York City.  She also enjoyed sometimes working weekends at Mr. Eaton’s farm in Northfield.

In 1957 Miriam married, literally the “boy next door”, Robert William Routa, at Lakewood Baptist Church.  Bob worked for the airlines and was transferred several times, which took Miriam to Illinois and then California.  When Bob retired, they returned to Ohio to be closer to family and friends.  Miriam was an enthusiastic fan of Cleveland sports, especially the Indians and the Browns.

For many years, Miriam relished her monthly get-togethers with good friends to play the game of Tripoli.  Miriam had a fun sense of humor and family and friends remember often joining her in bouts of laughter. She took joy in playing with her grandchildren.

Miriam had a beautiful soprano voice.  She sang in her high school chorus and in church choirs and continued to enjoy singing throughout her life.  She played the piano and would play familiar hymns while her father sang along.  Miriam liked to read the Plain Dealer and the Wall Street Journal and daily solved crossword puzzles and word jumbles.  She also spent her time sewing and completing various kinds of needlework.  Miriam was known for her delicious lemon meringue pie and apple pie.

Miriam was preceded in death by her parents, her brother Paul F. Jones and sister-in-law Abby (nee Gross) Jones. Her husband B.O.B. (Miriam’s nickname for him) passed away in 2008.

Friends and family are welcome to celebrate Miriam’s life on Friday, October 2nd, at Jenkins Funeral Chapel, 2914 Dover Center Road, Westlake, Ohio 44145.  There will be a visitation at 10 AM with a memorial service at 11 AM.  Interment will follow at Lakewood Park Cemetery.

In lieu of flowers, donations may be made to Hospice of the Western Reserve via mail 17876 St. Claire Avenue, Cleveland, OH 44110-2602, or online at donate@hospicewr.org, or to a charity of your choice.

Keeping you and your family in our thoughts and prayers

Service For Miriam B. Routa

Visitation For Miriam B. Routa