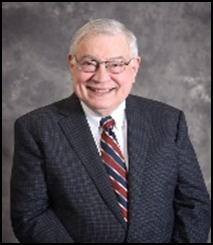 We both had our roots in Texas. We met on a blind date that was set up as a joke by Kirk and Janene Jefferies (nee Council). They set it up thinking we would hate each other. He showed up in a 3 piece suit, wingtip shoes and a pipe while I wore a dress my mother made in navy blue with big Hawaiian flowers, orange shoes and orange papier-mache earrings and bracelet.  I left the earrings in his coat pocket so he would call me.  We married in San Antonio, Texas, one year and one week to the day of our meeting. I was 18, off to my freshman year of college and Chuck was 21,completing his senior year at the University of Texas. We married August 19, 1967 and spent two years in Houston Texas. Armco Steel moved us to Middletown, Ohio where we lived for 4 years, then built our home in Germantown, Ohio where we raised our two girls.  We moved to Cleveland, Ohio in 1996 for the second part of his career with Thomas Associates, Inc.

Chuck always loved the song by Frank Sinatra, “I Did it My Way” and that is how he lived his life with a driving desire to forge his own unique path for himself as a young man and then for our marriage and life together as a loving husband and father.

My dear brother-in-law, Stu Ervay, captures the essence of my beloved Chuck:

Charles E. (Chuck) Praeger III was my brother-in-law. I met him a few months after my future wife and I began dating. He was still a high school student and five years younger than Barbara. Like many younger brothers, Chuck could find ways to upset Barbara. And be jealous of the guys she dated. Maybe even a little suspicious of them.

I was no exception. But he made a real effort to become acquainted with me. And after decades of wonderful family interactions, the last thing he told me in a phone conversation a few weeks ago is, “I love you.”

Chuck loved life. He loved his wife, Denece. He loved his two daughters, Leslie and Laura. And his grandchildren, nephews, and others in the extended family. Most of all, he loved being around people he cared for. And to have one hell of a good time. That is what he was doing the day before he died. With his family.

Chuck was a debater in high school. He enjoyed reading history and listening to quality music. It was music that cemented the bond between Chuck and Barbara. It was the love of good music that had been nurtured by their mother, Mary V.

Their father, Charles E. Praeger, Jr., (Charlie) was a graduate of Texas A and M. An “Aggie.” A proud Texan.

Charlie was an architectural engineer and served as a company commander of an engineering company during World War II. After the war he remained in the army reserve, retiring after 20 years as a lieutenant colonel. In civilian life Charlie became an executive in two steel fabricating companies, Mosher Steel of Houston, and Campbell Steel of San Antonio.

Charlie wanted Chuck to attend Texas A and M. He did. For a semester. Before switching to A and M’s archrival, the University of Texas. Not to be an engineer. But to major in history and prelaw.

Charlie wanted Chuck to become interested in hunting and sports.  He could not care less.

However, they found common ground in the love of food and cooking. Texas style! In that pursuit Chuck left Charlie in the dust!

Well, Chuck, I hope you think I treated your sister properly over the years. I did my best. Just as you did your best to be there for your family and all of us who loved your passion for life. You had a good run, and you made a difference! Rest in peace.

A small, private memorial service will be held at Chuck and Denece’s home for immediate family on October 23rd.  A  Celebration of Life party, ‘Praeger-style’ will be held in their backyard, which Chuck loved so much, on late spring/early summer 2021 timing.  Details about this party will be shared at a future date.

In lieu of flowers, Chuck would have appreciated donations to their church:

Please contact Jane Coil about donations to the Memorial Fund for the church.

So sorry I had not heard of Chuck's death. We were cousins and childhood friends in Dallas. My prayers and thoughts are with Denece and all of the family. He was a fine man and loving husband, father, and grandfather.

Denece - Just heard about Chuck. Marci and I pass on our deepest sympathy. Enjoyed our years knowing and associating with you both.
You are in our thoughts.

I will always remember how kind Chuck was to me when I was asked to serve on one of the MBMA committees, not knowing what to expect. He made sure I felt a part of the team, and he willingly shared his industry knowledge. Chuck deftly handled our committee meetings and always made you feel like your contributions matter. He was a good person that will be missed.

Thank you Chuck, Denece, Leslie, Laura and all of the assorted dogs you have had in your life for making my life so much better! The summer visits, the phone calls, basket parties, deep conversations, cooking in the kitchen, sitting on the back patio, drinking wine, meditating, and so much more with all of you has made my life so much better than it would have been without your presence. Most important has been the love - being able to be a part of the love you all so easily share and expressed with each other and inviting me into this wonderful space! Chuck, my dear sweet friend, I will miss you forever! See you on the other side and in the meantime - I am loving seeing you fly above my house as the deeply spiritual (and fun) soaring hawk that you are! All my love to you all - Jen Markow

In addition to being the best brother-in-law anyone could ask for, Chuck loved and adored Denece and lived life to the fullest with her. The best time I had with Chuck was after Denece had her knee revision. I spent two months with them and had a great time with Chuck cooking and talking and getting to know him. He really became my brother after that visit and I’m very sad there won’t be any more.

Much love from your Minnesota Sisters. Your family is in our thoughts and prayers .

Was so saddened to hear this news. Mr & Mrs. Praeger are like another set of parents to me. I enjoyed his visits where I always learned something. Or listening to my parents tell of the crazy antics they got into with "The Praegers". He was such a good guy and I will remember his warm gentle smile.
I know my parents valued the wonderful friendship over the years. May he be resting easy and flying around his backyard keep an eye on everything. Love you both!!

He was the best brother in law anyone could ask for.

We will miss Chuck so very much. He always had a smile and welcomed all with a warm heart. He watched our children grow up and enjoyed cooking, playing and chatting it up with our kids (Luke & Reese). They called Chuck grandpa because that is who he was to them. We are so blessed to have have 3 set of grandparents in their lives. We will hold you in our hearts forever- with a laugh , a smile, a hug and a toast!!!
The Kern’s

Family is everything. For over 50 years family has meant a union of the Praegers and Ervays. And the other families and individuals we have included in our loving universe. We have lost a powerful cheerleader for who we are and what we stand for. For what we mean to each other. But Chuck's message of love still resonates with us, and will continue in the years ahead. Chuck's dynamic persona will always be part of our family. And we are grateful.

My Dear Uncle Chuck. I will leave most of my memories when our family gets together for the tribute of his life. I will say I already miss him sooo very much!!!
He was a great husband to my wonderful Aunt, and my cousin’s.
Right now he is hopefully enjoying being with our family in heaven.
You will be missed SO very much, and the love For my Uncle will never stop.

It is with a heavy heart but wonderful memories that I add to this guest book for Chuck Praeger. Denece’s note in her comments of being set up on a blind date by Kirke and me is still one of the best memories I have. And, yes we really thought the two would never hit it off and we would be laughing really hard since they were very different from each other at that time!! But the joke was on us, and what a joke it was. I was so honored to stand in for my late husband, Kirke, as Best Man at the 50th Anniversary Renewal of Vows Ceremony. Kirke considered Chuck the twin brother he would liked to have had. As teens when things at home didn’t go as they wanted, each knew they could find solice, support, and brotherly affection at the other one’s house. That support and affection continued up to Kirke’s death in November of 2002.
Chuck will be remembered far into the future and missed by many he touched over the years.

Chuck was Tim's best man at our wedding. That is a huge honor, but Chuck's place in our lives was so much more.

He was a wonderful friend and "brother." We truly feel that we have lost a family member. There are so many great memories and it is unbelievable that he is no longer with us! He just made a huge impact on all who knew him and we are honored that we were friends for so many, many years.

God bless Denece, Laura, Leslie and his friends and family members who mourn his passing as much as we do. He will live in our hearts forever, and we are comforted to know that he had a fantastic last day here on earth. Sending love and prayers to you all.