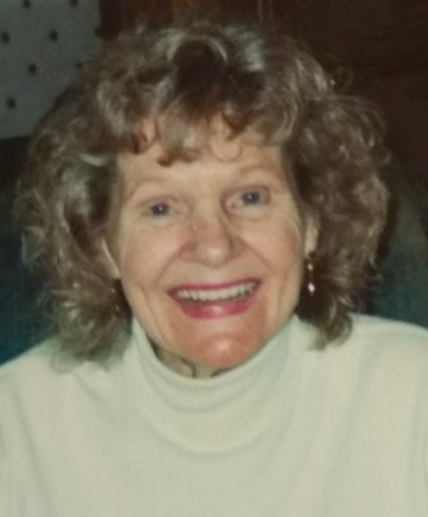 On this day, 1/26/2021, we lost a very bright light.   Margaret was a multi-generational
matriarch who has passed peacefully from earth into heaven. To her family, from
children to grandchildren to great grandchildren, this world seems to have lost a bit of its
luster.
Margaret was born in Illinois and moved to Indianapolis when she was 2.  She met her
future husband, Sherman (Bud), in grade school.  While she was a popular student, and
had many casual male friends, Bud pursued only her. They were married July 16, 1949.
She was 20 and he had just turned 21 three days prior. Together they had 8 children.
Though serving her large family as a stay-at-home mom and finding herself abruptly
widowed at 49, she quickly learned how to direct the financial affairs of the household
while persevering through the challenges of single motherhood.  Since serving was her
passion, not only did she successfully raise those children still living at home, she
opened her home to her grandchildren.  With grateful voices they testify to the wit,
wisdom, humor and unconditional love and acceptance of Grandma.
As her children grew and required less of her time, she found others to serve.
Consequently, she gave of her time and financial resources to helping intellectually
challenged children through her church, as well as the homeless in downtown
Cleveland.  She labored in these ministries not as a pastime, something merely to keep
busy, but as a passion in service to her Lord.  Having experienced loneliness and
sorrow by the Providential loss of her husband in the midst of her years, she could
experientially know and commiserate with those whose needs she could alleviate, and
whose sorrows she could soothe.  Additionally, she was a firm believer in prayer, and
would offer to pray with and for all in need.
She never knew a stranger and had a ready smile for everyone.
A diligent student of the Bible, she rejoiced in the promise made in the New Testament
to believers, that “to be absent from the body [is] to be present with the Lord” (II Cor
5:8). While that same absence is to us a great loss, to her it is a great gain, as she rests
in the arms of her great Savior.  And to be assured of this truth also gives us great
peace.
Having run and finished the race that was set before her (Heb 12:1), she leaves behind
her children, Coleen Tuckosh (Bob), Colette Clark (Bill Lamont), Dennis Clark
(Katherine), Connie Clark, Kevin Clark (Sissy), Keith Clark, Cathy Clark, Casey Clark
(Karlene).  Her grandchildren:  Therese Barron (Jim), Tammy O’Neill (Dan ) Sharon
Gordon (Trevor),), Kelly Hogan (Dan), Christine Moore (Wil), Joshua Clark, Rachel
Acebedo and 12 great grandchildren. She also leaves behind her two sisters, Mary Lou
Skinner and Ann Patrick.

Her children rise up and call her blessed. (Proverbs 31:28)

My deepest sympathy to the entire Clark family.
Last year I got the opportunity to meet your Mom .
She was a special lady, kind and caring , intensely curious about the world.
Above all, she was proud of her entire family.
She will forever be alive in your hearts.

I met Margaret washing dishes at God's Special Friends that meets at Christ the King Church. She did it all cooked, crafts and clean-up. Margaret loved all the people that came with their challenges to spend Wednsday evenings with us. She was kind and up-lifting to everyone she met.
Now I think of Matthew 25:34-35 Come, you who are blessed by my Father; take your inheritance, the kingdom prepared for you since the creation of the world. For I was hungry and you gave me to eat. Margaret rest in peace.

Right back at you the card sent from you.

My Dearest Sister,
Our friendship is a true reflection of our years of laughter and love a Precious Gift to Cherish sent from God above.
When you look back into a mirror my love you will see for the strength of our bond is the Hearts of you and me.
No words can express my love and the Years we had together we always laughed and talked on ends for hours. We'll see each other once again one day in Heaven and have more Wonderful times together.

Margaret this time I get the last word in you were the Beautiful one - HA HA!!
Love you and Miss you So Very Much Already my Sweet Baby Sister.

Until then Fly With Angels My Dear Baby Sister!!

I remember Meg as a vibrant young mother of a large family. I feel privileged to have known her for years.
Her family and friends were lucky to have had her as long as they did.
She will be missed.

Margaret was my Big Sister , who I always looked up to, and admired. I loved her very much and I will miss her.

I remember Aunt Margaret n Uncle Bud fondly. I remembers gatherings at Grandma n Grandpa's home at holidays with all the cousins and alot of love. My thoughts are with her family today