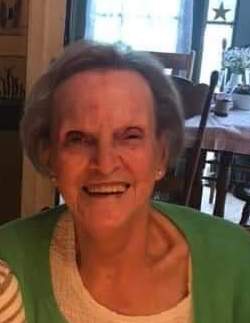 Born and raised in Dayton, Pennsylvania to Carl Jewel Stonbraker and Mabel Ione McHenry, Liz and her twin sister were the youngest of 11. Her first five years were spent on the family farm until they moved into the center of the metropolis of Dayton (population 500). After high school, she worked at her father’s butcher shop in Aspinwall, Pennsylvania delivering groceries. During her time there, a friend introduced her to her future husband, a Navy veteran. Following a short courtship, they married in a952 and lived in the Pittsburgh area. Carl’s career with GM took Liz and family from Sharpsburg, Pennsylvania to Royal Oak, Michigan and, finally, to Westlake, Ohio.

Liz was a dedicated homemaker who was active in her children’s school lives. Her passions were antiquing, interior design, reading and, in her younger years, dancing (particularly jitterbugging) with her twin. But her top priority and what she loved most was her family.

Memorial donations can be made to Ames Family Hospice, 30080 Hospice Way, Westlake, Ohio 44145. Due to Covid, a private family service will be held sometime this summer.